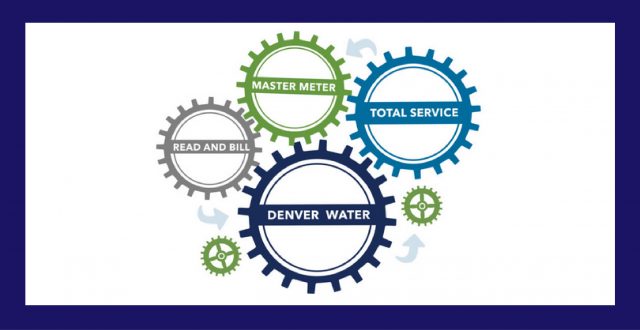 Southwest Metropolitan is a Read and Bill Distributor of Denver Water. Denver Water reads the meter and sends a bill to the district’s customers, while the district is responsible for operating and maintaining the infrastructure, such as distribution pipes.

The Mile High City of Denver covers 153 square miles. And with Denver in the name, you may think that is where Denver Water’s responsibility stops. But, the city only covers about half of Denver Water’s 335 square mile service area, and half of the 1.4 million people the utility serves daily.

Service for the people who live outside the City and County of Denver is provided through one of the 63 contracts referred to as “distributors.”

It’s one system made up of many partners working together. There are three kinds of distributors — Total Service, Master Meter and Read and Bill — that work with Denver Water every day to serve the 700,000 people who rely on the utility and live outside of the city limits.

Agreements between Denver Water and each distributor lay out obligations and responsibilities on each side, including the support the utility will provide to the distributor.

For instance, Denver Water is responsible for conducting all the water quality testing required by state public health officials — not only in the city but also in the distributor districts.

Denver Water also reviews new building projects that are proposed in the city and in the distributors’ districts, in addition to project reviews conducted by the local fire protection district and the local planning and zoning board.

Denver Water’s planners review all new developments with an eye toward ensuring the building and its customers can be served by the existing water distribution network or to identify what infrastructure upgrades may be needed.

“Denver Water has experts on our staff who review and model proposed additions, such as new development or redevelopment within the service area, to ensure our system is adequately built to provide the same high level of service to all customers,” Seagren said.

“We wouldn’t be the Denver Water we are today without the distributors. They’re a vital part of serving the 1.4 million people who rely on Denver Water for their drinking water.”