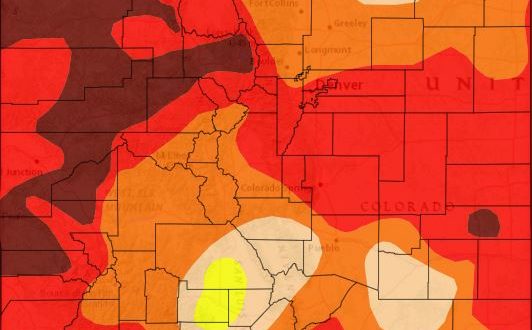 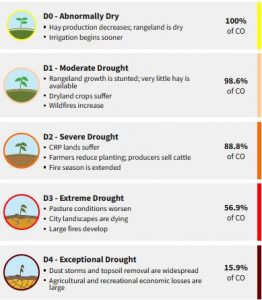 According to the February 23 update from the National Integrated Drought Information System (NIDIS), 16% of Colorado is in the exceptional drought category, 41% is in an extreme drought, 32% is in a severe drought, and 10% is in a moderate drought. Collectively, 100% of Colorado remains in a drought. The map featured above shows the drought conditions on February 23.

State reservoir storage is currently at 83% of average. Extreme soil moisture deficits and below normal precipitation means all basins should prepare for a low runoff year. The continuance of drought is expected through 2021 and the State Drought Plan remains in Phase 3 activation.

Though the February snow storms have helped snowpack, it is still too early to tell if there will be water restrictions. The decision to implement any restrictions should be known after the March 24 meeting of the Denver Board of Water Commissioners.

Denver Water’s reservoir levels are 77% full. This time last year they were 80% full. Denver Water’s supply reservoir contents as of February 22 are represented in the table below.