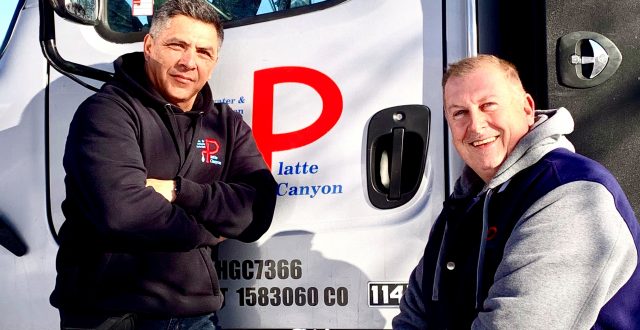 Many District residents will recognize District Operator, Bruce Yarish (pictured above on the right). Bruce has been providing service to district customers since 1985. His duties include responding to customer service calls, problem solving, and operating, repairing and performing maintenance on the District’s drinking water and sanitary sewer lines. Bruce enjoys interacting with District customers as well as the technical aspects of his job.

Bruce is well known in the community and is exceptionally involved in his children’s sporting events. When asked how he balances family with his career he stated, “family comes first, but Platte Canyon is my second family.” 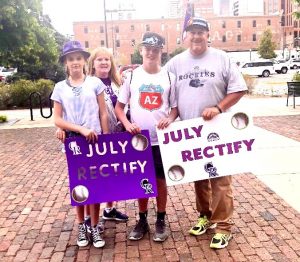 Bruce is a Denver native, with sports always being a huge part of his life, and that tradition now continues with his children. He has coached little-league baseball and scholastic football, basketball and wrestling. He currently announces for high school football and baseball games. Additionally, for several years, Bruce owned and coached a Denver-based national semi-pro football team.

Bruce describes the District as “cutting-edge, family-oriented, and employee friendly.” His years with the District “gave him the opportunity to expand his knowledge of the water and sanitation field and exposed him to many different facets of the field.”

Bruce’s favorite development with the District was “putting our plans and actions of our preventative maintenance into practical use.” He states that after working here for 35 years he has gained “an appreciation for loyalty and hard work.”

We appreciate your loyalty and hard work Bruce! Thank you for 35 years of diligent service and dedication to the District and its customers!

Many District residents will also recognize District Foreman, Armando Quintana (pictured above on the left). Armando has been providing service to District customers since 1999. His duties include responding to customer service calls, crew assignments, utility locates, problem solving, as well as operating, repairing and performing maintenance on the District’s drinking water and sanitary sewer lines.

If you have called the District for a service request, then you most likely have met Armando. He handles nearly all service calls during the regular work week.

Armando relocated to Littleton in 1999 and started working at Platte Canyon that same year. He had previously worked at the Alamosa Water Department in Alamosa, Colorado, giving him 24 years of experience in the water and sanitation industry. Prior to that he served in the United States Marine Corps for eight years and served in Operation Desert Storm.

Working for Platte Canyon has developed Armando’s career considerably. He moved up the ranks from an Operator I, to Operator II, to ultimately becoming the Operations Foreman.

Armando’s advice for prospective Platte Canyon employees is “show up early, work hard and take advantage of educational opportunities (provided by the district).”

Outside of work, Armando coaches competitive softball and enjoys spending time with his kids and grandkids. 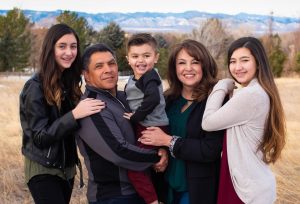 Thank you, Armando for your years of hard work and dedication to the District and its customers and thank you for your service to our country!