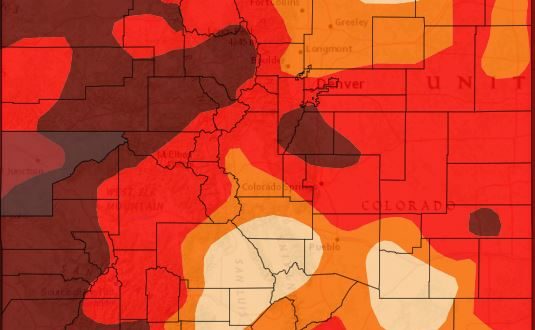 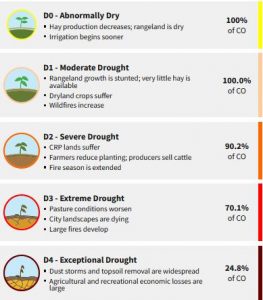 According to the February 9th update from the National Integrated Drought Information System (NIDIS), 100% of Colorado is in a moderate drought with 90% in a severe drought, 70% in extreme drought and 25% in the exceptional drought category. Drought conditions have lightened slightly within the last month. The map featured above shows the drought conditions on February 9th.

Snowpack conditions have improved after last weekend’s snowstorms. Based on NRCS data from February 10th, statewide snowpack is at 85% of average which is up from 74% from nearly a month ago. With 40% of the snowpack season remaining, it is still looking hopeful for a good runoff season, but it will not be known for at least another month if there will be increased water restrictions. Possible restrictions may include a late start for irrigation systems which may be set to a specific date, extending the Summer Watering Rules, and employing the voluntary “drinking water upon request” program for food service operations. The decision to implement any restrictions should be known after the March 24 meeting of the Denver Board of Water Commissioners.

Denver Water’s reservoir levels are 77% full. This time last year they were 81% full. Denver Water’s supply reservoir contents as of February 12 are represented in the table below.