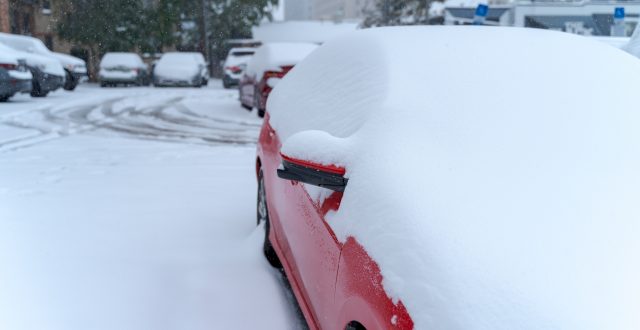 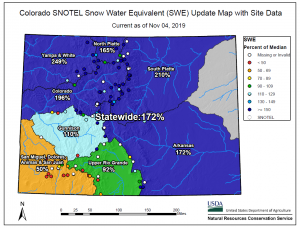 With over 15 inches of snow at the Stapleton Airport weather observation site last week, the month of October ended unusually frigid and snowy. Temps were below freezing for more than 100 consecutive hours last week. That streak finally ended on Thursday morning, when temperatures climbed back into the low 40s, just in time to make it possible for kids to trick or treat this Halloween.

Based on NRCS data from November 4, the Yampa and White river valleys are at 249% of the norm. The Front Range is also well above the norm for November. The South Platte River Valley, home to Denver, is at 210%. The Arkansas River Valley is at 172% of the norm.

Southwest Colorado is the exception to the high snowpack areas. Here, the San Miguel, Dolores, Animas, and San Juan Valley is at 50% of the typical snow water equivalent level for the date.

Despite the late October snowstorms, the majority of the state officially remains in a drought, according to the United States Drought Monitor’s most recent update on October 29. More than 80% of the state is considered to be abnormally dry. 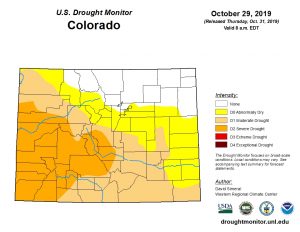